The logo that presides over all AFGW activity, including advocacy, is derived from the logo designed by members of the Norwegian Federation for the Third IFUW Conference in Oslo in 1924 and adopted by delegates as the permanent badge of IFUW and its national associations. The original showed an antique lamp representing the light of learning on a blue background broken with the letters IFUW. Around the central disc was an interlinked chain symbolizing the bonds of friendship linking IFUW members throughout the world. Eventually the lamp came to be known as the lamp of friendship. It was later modernized and the chain was dropped. 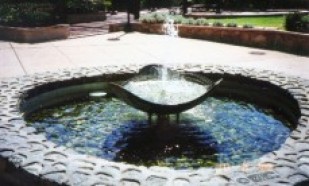 The lamp has been adopted by all national, state, territory and branch associations and adapted to better reflect local goals and activities.  Some of the State and territory Associations have also incorporated the lamp in their logos. These are featured on the left sidebar of this website. Click on them for links to their websites.
AFGW commissioned the design of a new logo when its name was changed from AFUW to AFGW but retained the lamp. The original lamp logo is not lost or forgotten in Australia. It lives on, through a permanent memorial which is a perfect replica and located at the St Lucia (Brisbane) campus of The University of Queensland. It is of a fountain presented by AFUW to commemorate the 15th conference of IFUW held at The University of Queensland 19-26 August 1965.
In April 2019, the name changed from AFGW (Australian Federation of Graduate Women) to AGW (Australia Graduate Women). The logo remains and the same and continues except for the name of the organisation.